How To Use Competition for Enhancing Performance Management 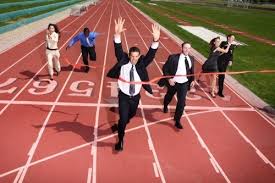 Recently, I was engaged in a discussion about how to use Competition for enhancing performance management in the workplace. An organization had just hired a hotshot sales rep and was eager to find out how the rest of his team would react to the added completion. He was hoping that the presence of this go-getter would motivate the rest of his sales force to kick up a notch.

As you know, competition is an essential part of business development. Superstars such as Apple, Google, and 3M work tirelessly to distinguish themselves from others in their field. Without competition innovation would stagnate.

Question is, is competition within an organization just as powerful and innovating?

I believe that healthy competition within a workplace can bring about many positive outcomes. When effectively and conscientiously designed, internal competitiveness can spur personnel development, encourage team work, and provide an atmosphere with a fun, competitive spirit.

However, too much competition can be detrimental. Most employees don’t enjoy being constantly pitted against one another. If competition is handled incorrectly, you could easily foster an environment of stress, backstabbing and low morale.

In fact, according to a study conducted at Washington University in St. Louis, women who are forced to go head to head in a highly competitive environment experience less creativity.

So what do you do? And how can you keep both genders happy?

When strategized correctly, healthy competition can be used as a performance management tool to stimulate creativity, align teams, and boost productivity.

Follow these best practices and you will ensure that your organization builds a positive team culture with a fun, competitive spirit that can move your business forward.