Why Owning Your Mistakes Is the Key to Success 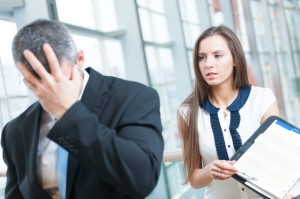 No-one likes to fail but history has taught us that when it comes to innovation and success you need to be willing to fail a lot on the road to success. Changing our attitudes around failure can be liberating!

“I have taken more than 9,000 shots in my career. I have lost almost 300 games. Twenty-six times I have been trusted to take the game-winning shot and missed. I have failed over and over again in my life; and that is why I succeed.”
– Michael Jordan

When top athletes fail, they acknowledge it, learn from it, and apply those lessons to the next game. If they continued to lament their mistakes and mourn their losses, they would find their athletic careers cut far short of their potential. In business, as in sports, mistakes are inevitable. It’s not the absence of error but the ability to forgive oneself and move on that distinguishes the star players from those on the bench.

The mark of a good leader is being the first to put one’s hand up and say, “I’m responsible for this.” In 2011, David Neeleman, Founder and CEO of JetBlue Airways, did just that. Severe weather grounded flights and frustrated travelers from coast to coast. In some instances, irate JetBlue passengers were kept on planes for more than 11 hours.

Instead of blaming the weather, Neeleman took responsibility, acknowledged the failure to live up to the airline’s promise of “bringing humanity back to air travel,” and apologized sincerely. Too often, leaders try to lay the blame elsewhere. This is ethically inappropriate and sends a message to the entire organization: “I’m not to be held accountable.”
Effective leaders own the mistake and, depending on the circumstances, ask for forgiveness. Doug Guthrie and Sudhir Venkatesh write in Creative Leadership: Humility and Being Wrong that admitting fault can be a “powerful tool for leaders,” one that allows them to build a culture that “increases solidarity, innovation, openness to change, and many other positive features of organizational life.” (2)

People at all levels need to be able to forgive themselves for errors so they can move on; otherwise, mistakes fester, haunting them throughout their careers. When someone commits a major faux pas and doesn’t appropriately acknowledge it, he will appear vulnerable. By not admitting to the mistake, she will lose the respect of everyone else in the organization.

Moreover, when someone lacks the strength or capability to deal with an issue, it can paint failure in his mind. It becomes a trap in which promising careers and people can easily become mired. If a leader finds himself in this place, he needs to make every effort to move past the mistake. It is sometimes necessary to get outside help to handle the problem.

Get a New Perspective

Bear in mind that these are mistakes or perhaps errors in judgment, not criminal acts or malicious wrongdoing. An executive, for instance, may have lost a long-time customer or failed to achieve a specific goal. Whatever the case, continually rehashing the events that led to the mistake, or failing to get the help needed to overcome it, benefits no one.

Leaders often find themselves on the other side of this equation when a subordinate has made a mistake. The response might be, “Well, hopefully this will go away” or “Maybe this person will quit on his own, and I won’t have to deal with it.” In these instances, the worst course of action—and the most cowardly—is to take no action.

It’s unfair to that employee and the morale of the entire team will suffer. The reality is that this person is aware of his failure but likely has no idea how to address it appropriately. He could move on to another area of the business, or through a paradigm shift adopt another mindset, and contribute remarkably well. It is the leader’s responsibility to facilitate this as much as possible.

Mistakes do not define people; the manner in which they deal with them does. You can find patterns of success after failure throughout history and our world today. What is important about our failures is acknowledging them, learning from them, and forgiving oneself. These are critical actions as is ensures that one doesn’t make the same mistake again!

Subscribe to Michael Whatmore’s monthly newsletter, to make sure you never miss a beat.