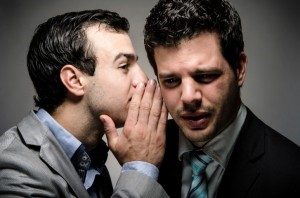 Change at work can be daunting—both for the employees who must adjust and for a leader who wants to effect change. The challenge of how to get employee buy in is a critical one.

Organizing an enrollment conversation is an excellent way to introduce change and win team support and commitment. New initiatives are always met with varying levels of buy–in. Your job as a manager is to bring everyone into alignment and ultimately committed, enthusiastic enrollment.

Identifying where people are along that spectrum is critical in driving ideas or initiatives forward. Spotting the “unenrolled” employee and taking steps to get them onside are crucial if you want to move individuals along the continuum of change and find support for your ideas. Watch for these seven signs in meetings, which indicate that your team is not fully on board:

While not actively refusing to participate in the change, they are doing their utmost to ensure its lack of success. We’ve all met people who cannot fathom change. They want to maintain the status quo because it is comfortable, something they know, and something on which they can rely. This mindset is a primary reason why organizational change is often thwarted, and the primary reason why you as a leader need to focus on facilitating effective enrollment conversations. This is a key part of how to get employee buy in to the new vision or plans going forward.

Remember: Absolute agreement is not the goal. The goal is to get everyone moving in the same direction. One conversation doesn’t accomplish this for everyone, which is why enrollment is an ongoing process. It is a progression built on open, honest discussion and acknowledgement. A leadership team that owns and effectively implements change doesn’t just appear; it is nurtured

Error: View quotf22e556j36quot may not exist