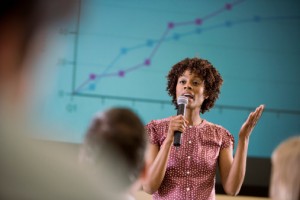 “As we look ahead into the next century, leaders will be those who empower others.” – Bill Gates

The essence of leadership is facilitation. It’s about being the person who helps others bring their ideas forward for the good of the team and not the one who has all of the ideas or who dictates a specific outcome.
People who facilitate and empower change through others are recognized as leaders. It is often helpful to look back on effective leaders and take advantage of their perspectives to inform our own style of leadership.

“A leader is best when people barely know he exists, when his work is done, his aim fulfilled, they say: we did it ourselves.” – Lao Tzu

According to legend, the Chinese sage Lao Tzu met teacher, editor, politician, and philosopher Confucius at a crossroads, where he told the philosopher to, “Strip yourself of your proud airs and numerous desires, your complacent demeanor and excessive ambitions. They won’t do you any good.” He advised dropping the ego—an invaluable lesson for anyone who seeks to lead.

“A leader is best” when he or she stands back, removes airs or ambitions, and lets the team work together. This creates a sense of pride and accomplishment and a sense that they have the tools and wherewithal to tackle challenges and develop viable, effective solutions.

A good leader knows how to facilitate this self-sufficiency. When this person has done the job well, the group functions as a high-performance team without him, and they are able to say, “We did it ourselves!”

“No person will make a great business leader who wants to do it all himself or get all the credit.”

Andrew Carnegie sold Carnegie Steel Company to JP Morgan for $480 million in 1901, which translates to $13.6 billion in today’s terms. However, even from his “rags-to-riches” beginnings in a poor Scottish family to his position as one of the wealthiest men of his time, he is remembered mostly for his philanthropic activities and leadership philosophy.

Carnegie lived this ideal by recognizing the contributions of others, such as Charles Schwab and JP Morgan, and allowing them to grow the company. He knew that he didn’t have all the answers, so he surrounded himself with people smarter than himself and let them work.

“The leaders who work most effectively, it seems to me, never say, “I.” And that’s not because they have trained themselves not to say “I.” They don’t think “I.” They think “we”; they think “team.” They understand their job to be to make the team function. They accept responsibility and don’t sidestep it, but “we” gets the credit. This is what creates trust, what enables you to get the task done.” – Peter Drucker

A sociologist, professor, consultant, author, and “social ecologist,” Peter Drucker was often referred to as the “man who invented management.” He believed in the notion that, when led well, organizations were among the most noble of inventions.

This echoes Carnegie’s sentiment that credit should be given to the “we” of the team and not the “I” of the leader. The leader steps back to allow the team to function and ensures that others—including the team members themselves—know that success was achieved through their contributions and efforts.

Peter Drucker also said, “The only definition of a leader is someone who has followers.” Simply put, no matter how great the talent or experience of the individual, “without followers, leaders don’t exist.” Effective leaders realize that, without their team, they are rudderless ships; with them, they can achieve greatness.

Talk to me about your situation:

How To Get People To Buy In to Your Ideas

t’s not always easy to get people to buy into an idea. Even if it’s a smart idea – and ...
Read More

What To Do When You Inherit Unhappy Employees and Productivity Drops?

When faced with coming into turnaround or change an organization how you relate to the existing employees will be a ...
Read More

How To Help Employees You Inherit Buy Into Your Vision

Inheriting an existing team when you come into a new organization or business in a leadership role is a pressured ...
Read More